When is this useful? Twitter tailored audiences can be used strategically whenever advertisers want to make sure their message reaches the audience that is most likely to take action based on that message. For example, a clothing retailer might want to create an ad letting members of their loyalty program know that there’s a special members-only sale coming up—but this ad obviously isn’t going to be all that effective if very few of the people who see it are loyalty members. By using Tailored Audiences, advertisers can ensure that their targeted ad ends up in front of a responsive audience.

Tailored Audiences is relatively easy to use, especially if you already have a Twitter business account and customer email lists. Let’s look at the step-by-step process to setting up Tailored Audiences.

Tailored Audiences requires you to either have a Twitter Ads account or to go through one of Twitter’s existing ads partners. These ads partners will store your CRM records (including pixels from your website) to help you better identify your audience and retarget ads to current customers and people who have browsed your site. Twitter’s current ads partners are:

You do not have to set up an account with an ads partner in order to use Tailored Audiences. You can also create tailored audiences based on your own CRM databases (such as email lists stored in Mailchimp), as long as you have an Ads account. You may already have this type of account for your business, but if not, you can easily set one up here.

When setting up your ads account, you’ll need to choose whether you want to use a Promoted Account or Promoted Tweets. A Promoted Account will allow you to have your business’s Twitter account featured in the ‘Who to Follow’ section for targeted users, while a Promoted Tweets account will place your Tweets in the Twitter streams or search results of targeted users. Promoted Tweets will most likely be more useful for Tailored Audiences because it will allow you to choose specific messages, rather than just promoting your brand name. However, a Promoted Account may be useful if your main goal is to gain followers. We’ll go over how to use Tailored Audiences with both types of accounts.

How to Use Tailored Audiences with a Promoted Account

How to Use Tailored Audiences with Promoted Tweets 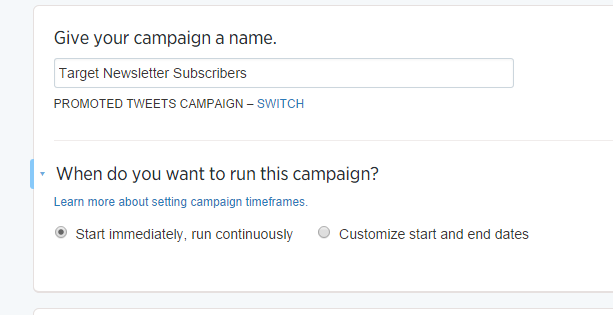