Let’s say you own a San Francisco cycling shop and want to reach your target audience on Facebook. With more than 1.3 billion active monthly users, it’s pretty much a guarantee that there are a decent number of people on the social network who would be interested in your store. But how do you find them?

To put it in the kindest terms possible, Facebook’s generic audience for ads is average at best. If you use it, you might be able to reach more people, but it’s kind of a shotgun approach. That means you’re probably putting your ad in front of a lot of people who really aren’t the best audience. There are ways that you can manipulate this audience to get it closer to what you’re looking for, but even then you’re going to be hitting up a lot of people who really don’t have an interest in your ad.

But what if you could specifically pinpoint individuals who are more likely to be customers ahead of time? Or learn more about people who are already customers so you can better tailor your marketing and increase conversions? This is the promise of Facebook Graph Search.

What Is Facebook Graph Search, and How Does It Work?

Facebook Graph Search is an app created by and for Facebook that allows you to identify groups of people by entering different queries that focus on variables such as their location, age, sex, interests, and even photos that they’ve ‘Liked’. This may sound a lot like traditional marketing demographic work, but the true power of Graph Search is its incredible versatility and specificity.

What does that mean? Let’s use the example of a page I admin for sci-fi and horror TV shows, On Edge TV. To learn more about my fans, I can run some of the following queries to bring up Facebook users that match:

People who Like ‘On Edge TV’. This allows me to see a complete list of Facebook users who have said that they Like the On Edge TV Facebook page. This is my core audience and the people that I need to please.

Now that I know who my fans are, I can see where they are by refining the results on the right side. While there are more than 100 people who Like On Edge TV in New York (not surprising since it’s a big city with lots of people who are into the arts), Los Angeles is home to only two. This tells me that we’re probably better off focusing marketing efforts in the Big Apple for immediate conversions, but also that we probably need to do more to make inroads in Los Angeles. 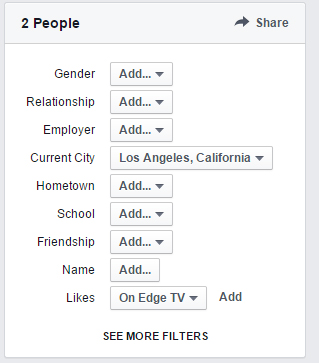 Other ways to refine these results include relationship status, current city, hometown, sex, and so on. But while refining is nice, you can also get more specific by using more creative queries.

Favorite interests of people who like On Edge TV. What kinds of things do my fans like? While two of the top results are not surprisingly movies and music, some are more interesting and specific. Like Halloween. Or Star Wars. Or steam punk. And (somewhat surprisingly) camping. Knowing that a higher percentage of your fanbase has these interests can help you to better direct your offerings toward them. 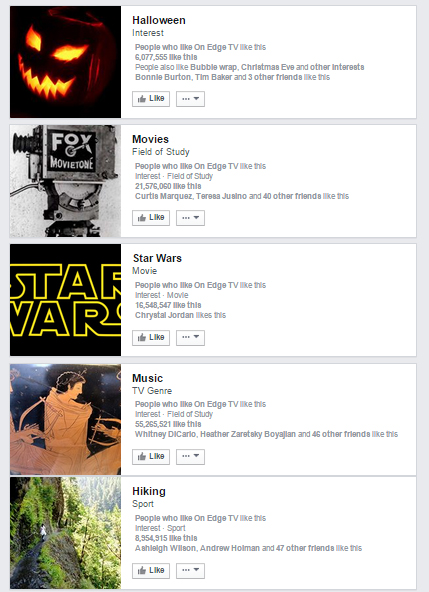 Favorite movies of fans of On Edge TV. While “movies” may be a fairly generic interest, you can make it more useful with a query like this, which will list the movies liked by the most people in your audience. Again, many of the top results were things you would expect for a site that focuses on sci-fi and horror content – Blue Ruin, Deliver Us from Evil, Dracula Untold – but wedged in there near the top is the comedy Western A Million Ways to Die in the West. 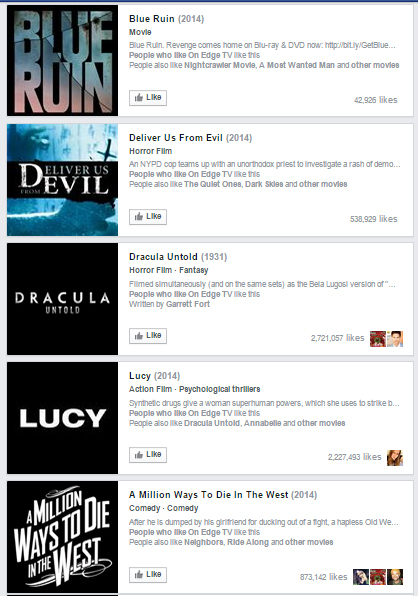 This tells me that, while the audience definitely comes for sci-fi and horror, there’s an opportunity to do well with the right kind of humor as well.

Favorite musicians of friends of fans of On Edge TV. This query is interesting both because it is an attempt to reach fans of one medium (TV) by learning about another (music), and because it doesn’t target your fans directly, but your fans’ friends. So while fans of On Edge TV prefer Rob Zombie, Steve Martin, and Will Ferrell (more evidence of comedy love), their friends are most into gospel, country, and Christopher Walken (yes, he’s listed as a musician, too).

What does this tell us? I’m not completely sure, except that somehow finding a way to incorporate Steve Martin, Will Ferrell, and Christopher Walken into our content or marketing may help bring in more fans.

The More You Know, the Better You Can Connect

The point of all this, of course, is to help you to refine your marketing campaigns so they will do a better job of connecting with the audience you want to reach. Do this and you’re far more likely to convince them to convert.

Next time we’re going to step away from how Graph Search can help you learn more about your customers to show you how it’s also a great tool for identifying the people who frequent your competition. Once you know who they are and what they like, you’ll be better able to focus your efforts on bringing them to you.